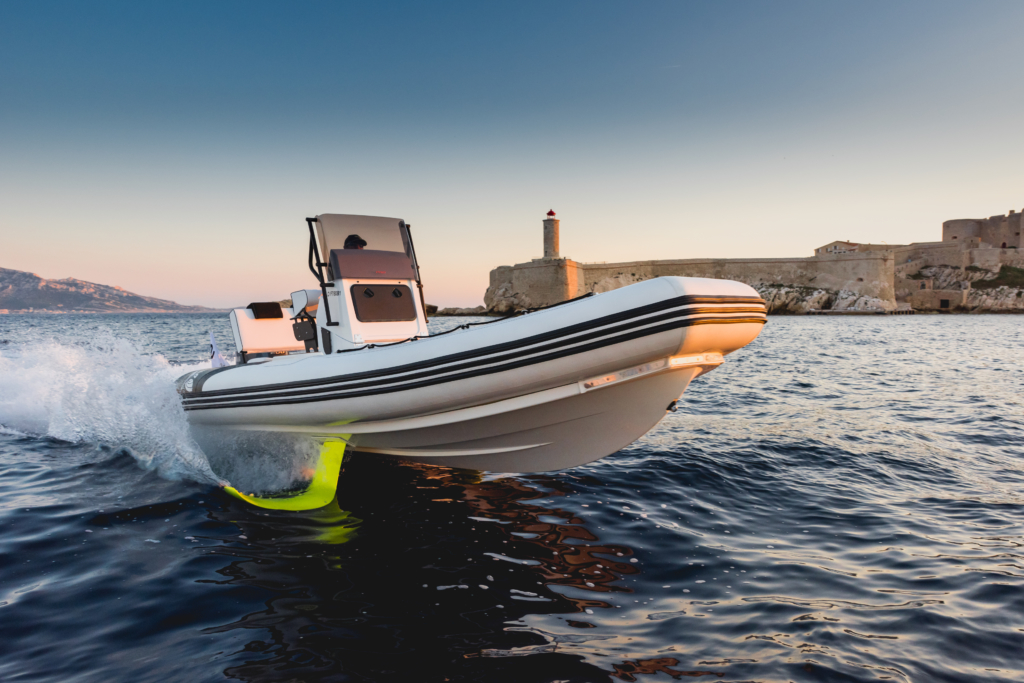 The year 2018, ending with Nautic Paris, the Paris Boat Show has been particularly rich in events, innovations and acknowledgements for SEAir. Looking back over our last twelve months…

At the end of 2017, having opened its Research and Development field to motor boats, SEAir put a Flying RIB ©  5.5 m on the market, a semi-rigid which democratised the foil, enabling a foiling system to be used in all simplicity for leisure and recreation. Due to its retractable and adjustable foiling systems, the performances have been improved; enabling navigation in complete safety, the same at sea offshore. The tests have demonstrated a gain in stability and comfort, with the sensation of gliding over the water and a incomparable flight, a noticeable reduction in motor speed – therefore noise as well – and consequently a reduction in fuel consumption, of around 30%.

Launched in July 2017, the first Flying RIB has travelled over more than 2,200 miles one year later – that’s 250 engine hours –consequently with fuel economy and overall low wear due to its flight above the water ! At the beginning of 2018, SEAir was committed to the development of a 7m version, whilst concretizing the first sales of the 5.5m version.

This tranquil revolution based around SEAir’s flying RIBs continued during the first half of the year, between test phases, demonstrations for French and foreign journalists and our clients, particularly in Switzerland and the Mediterranean.

On the subject of Awards and prizes, 2018 has been very rich !! Above all, the first months of the year were marked by our presence at the Gala de Monaco de l’Union Internationale Motonautique for us to receive the prize « special mention for environmental benefit » during the UIM Awards. In the wake of this SEAir also received the prize for innovation from the Cercle de l’Arbalète by the French army. ADEME has also awarded our project « bateau Green Foiler ».

In the autumn of 2018, SEAir took to the road again with the international Boat Shows; the Cannes Yachting Festival and the Monaco Yacht Show in September. The Monaco Yacht Show had the privilege of the first appearance of the Flying Tender « luxury » commended for its design by the Nathalie Ryan’s Kirei Studio, which has resulted in alchemy between comfort, security, innovation and luxury.

In parallel, SEAir has been innovative in a different area with a powerful foiling semi-rigid destined for professionals and the military: the outcome being the Sillinger AirShark 765 © exhibited at the EURONAVAL Salon in October, with unquestionable success.

At METSTRADE 2018 the following month, during this world-renowned show, SEAir was nominated for its adjustable and retractable foiling systems at the METSTRADE Awards, in the category « Innovation on board design solution ».

SEAir was also in London in December, with a sailing orientated nomination at the British Yachting Awards, in the category ‘Sportsboat of the Year’ with its innovation that helped make the famous 6.50 sailing boat Mini747 fly.

Between the boat shows and the big nautical events, SEAir has also crisscrossed the French ports, from Monaco to Marseille passing by Saint-Tropez – with its new Flying Tender « luxury » 7m. in white – , then the brand was noted at the start of the prestigious Route de Rhum race at the beginning of November 2018, being used as a Press coverage boat for France Television and for the KIHO team in class 40. At the end of the year 2018, the presence of SEAir at the Paris ‘Nautic’ boat show was inescapable, not only as winner of the Paris Nautic’s prize for innovation 2017, but also as leader in foiling semi-rigid boats.