Home > News and Events > SEAir and Green energy: more than just a stance!

SEAir and Green energy: more than just a stance!

As part of the Investments for the Future program, SEAir, supported by the ADEME (French Environment & Energy Management Agency), has been working for over a year on the transition from combustion propulsion boats to greener solutions. SEAir is not an engine builder, but knows that foils allow motor boats to navigate on lower engine regimes with faster speeds, thanks to the reduced hull drag, SEAir considered them to be an asset that gives even more added value to engine transition.

Even if electric engines are less powerful than thermal engines, they have a better mechanical efficiency. A foil-equipped boat with a thermal engine will take off at about half its power, with a low torque, whereas one with an electric engine will at almost full power and full torque, which is sufficient to obtain the maximum efficiency of foils, all the while limiting the peak speed. 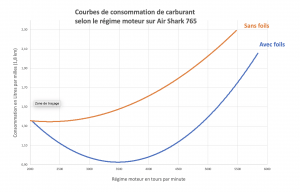 Foil advantages on fuel consumption appear before flight speed, as the hull rises above the water, starting at 10% to reach its peak point at optimum foil height and speed, around 40%, and reduces again at maximum speed and in heavy seas. Following these results, SEAir is convinced that aiming for lower fuel consumption without sacrificing motorization is a realist and ecological undertaking.

As part of the SEAir-ADEME project, several points of notice:

– Initially, SEAir was considering repurposing a 5.5m and 7m thermal engine Flying boat with an electric engine, but it became apparent that a foil equipped semi-rigid – as SEAir sells today – would have been far too heavy and would lack range due to the batteries. The boat would also have to be new and it’s price would have been doubled.

– Further studies have shown that significant gains can be made using a new generation foil system on a different kind of boat than originally planned. This first phase has been successfully validated without reservation by the ADEME. The second phase, focused on the boat of the future has been launched.
– The completion of such a boat will require new external funding and SEAir has started looking for partners in this direction.

There is no doubt today, that the boating industry faces the challenges of climate and must work on its ecological transition by focusing on cleaner and low emission sustainable technologies. To encourage the industry, ambitious national and international goals have been set, notably regarding the Paris 2024 Olympic Games. Several projects focused on lake and river waters exist, with the example of Seabubbles. And also for offshore use with wing masts or hybrid propulsions also taking shaped on cargos, but without foils. 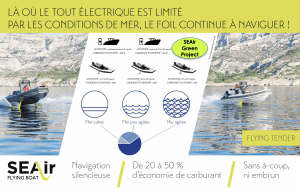 SEAir focuses on the inshore sea market, with potential rough seas, and the possibility to travel on long distances, where batteries would not be fully satisfactory. This market, which is not quite advanced on ecology, will likely focus on hydrogen and foil based systems. But that is another fascinating revolution!