Home > News and Events > SEAir and flying boats: a successful 2019!

SEAir and flying boats: a successful 2019! 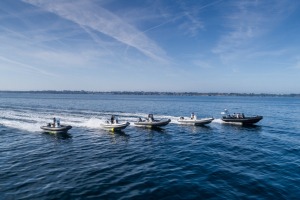 2019 ends very well for SEAir, who enjoyed  great success with their “Green” show on the Seine river recently during the Nautic Paris on December 12. Professionals, Paris regional officials, MPs, river police and also journalists and bloggers were invited during the day to test our 7m Flying Boat – now docked at the Paris Yacht Marina – and find out more and discuss SEAir’s latest innovations. The reduced wake and lower noise were the main topics at the centre of the discussion. SEAir presented the 2020 roadmap focusing on fuel economy with the Foiler Bio project, boat that will take flight at low speed.

This year had already started well with the success of the Foiler Beneteau, a futuristic 10m boat, weighing 5 tons, that took flight in february 2019.

On the threshold of 2020, SEAir’s team is in high spirits, especially with the last orders of the year: a 7 m. 65 passenger transport for a tourism professional and a Premium version. We have started fitting out the boats in our Lorient workshop, and they will be delivered in the spring.

Since the first flight in July 2017, 15 civilian and military boats have left SEAir’s workshop.

Tourism will be a promising market for SEAir in 2020, with projects in France, Europe and the United Arab Emirates.

Studies regarding bigger boats are also being finalised, not to make them fly, but to reduce stress on the keel, allowing for better stability and lower fuel consumption.

Concerning the military, the Marine nationale and several foreign Navies have been in touch with SEAir to evaluate their systems. In France, this has already taken shape, and the DGA (France’s defence procurement agency) has entrusted SEAir with the mission of modifying a special forces ETRACO, to test its new performances. The important project, spanning over 2019 and 2020, has produced a new concept: a new generation flying assault boat. Supported by the DGA, this French project was presented to the other 27 members of the European Union, with a favourable reaction from four nations. The project of a European consortium for a multi-nation boat, driven by France…

2020 will be a very positive year for SEAir, with the major challenge of accelerating the commercial aspect and pushing further forward after a great 2019. A first international rendezvous is in the books: the boot Düsseldorf, January 18-29, where will be present, with a boat at our booth!

Without moderation, fly above water with SEAir and glide through 2020 in the greatest comfort!