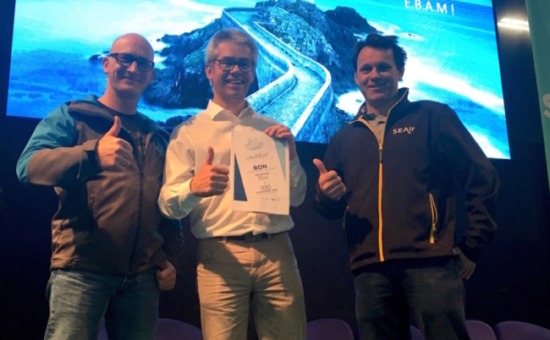 This award recognizes the company’s work in the last two years on motor boat and sailing yacht foil systems. When SEAir succeeded in getting the first RIB airborne, it paved the way for a revolution in the motorboating community, winning over boat industry professionals and the general public. It offers convincing arguments for motor boat enthusiasts, with a combination of comfort and speed, and almost perfect surfing sensations.

The Zodiac Pro @ 550, the first RIB in the world fitted with foils, was shown at the Nautic Innovation Awards stand, and was a huge success with the general public.

The Nautic boat show was also an opportunity for SEAir to disclose a partnership with ZODIAC Nautic, and announce their joint project on the Avon Gt670 “Flying RIB” by SEAir. This rigid inflatable will be fitted with retractable servo controlled SEAir foils.