Following in the wake of the Mini 747, SEAir strikes again with a world first! The company that specializes in outfitting boats with foiling systems revealed its latest innovation on 12 July 2017. This is a Zodiac 5.50 fitted with retractable and adjustable foils.

The Flying RIB had really good weather conditions on its first time foiling at sea. Systems assessment trips will continue throughout the summer.

Based on the principle that the craft must keep all the popular characteristics and merits of the rigid inflatable, SEAir designed an innovative system that installs the foils under the hull, beneath the steps and floats, occupying minimal space inside the boat. The foil can be raised and lowered inside its casing, with an adjustable angle of attack. The SEAir Flying Rib demonstrator is powered by a standard 115 hp Yamaha engine with an extra-long shaft.

On its first time out, the boat demonstrated its ability to push the boundaries of comfortable boating both in Lorient Harbour, in slightly choppy waters, and in a rougher sea offshore in 70 cm waves. Contrary to the usual nosing up behaviour of a RIB in waves, with the bow lifting and falling resulting in slapping, the SEAir prototype kept a straight and stable trim, skimming evenly over the crests of the waves.

The first data collected from the many trials was highly conclusive. The boat’s stability and comfort underway were impressive, which should be life-changing for future users. The resulting reduction in engine speed instantly decreased the noise level and fuel consumption. Whether the straight line and turning tests were carried out in 70 cm waves, at slow speeds of 15 to 17 knots, or in flat calm, with top speeds of 40 knots, the tests were highly satisfactory. The craft left very little wake, which contributes to stability in enclosed boating areas. 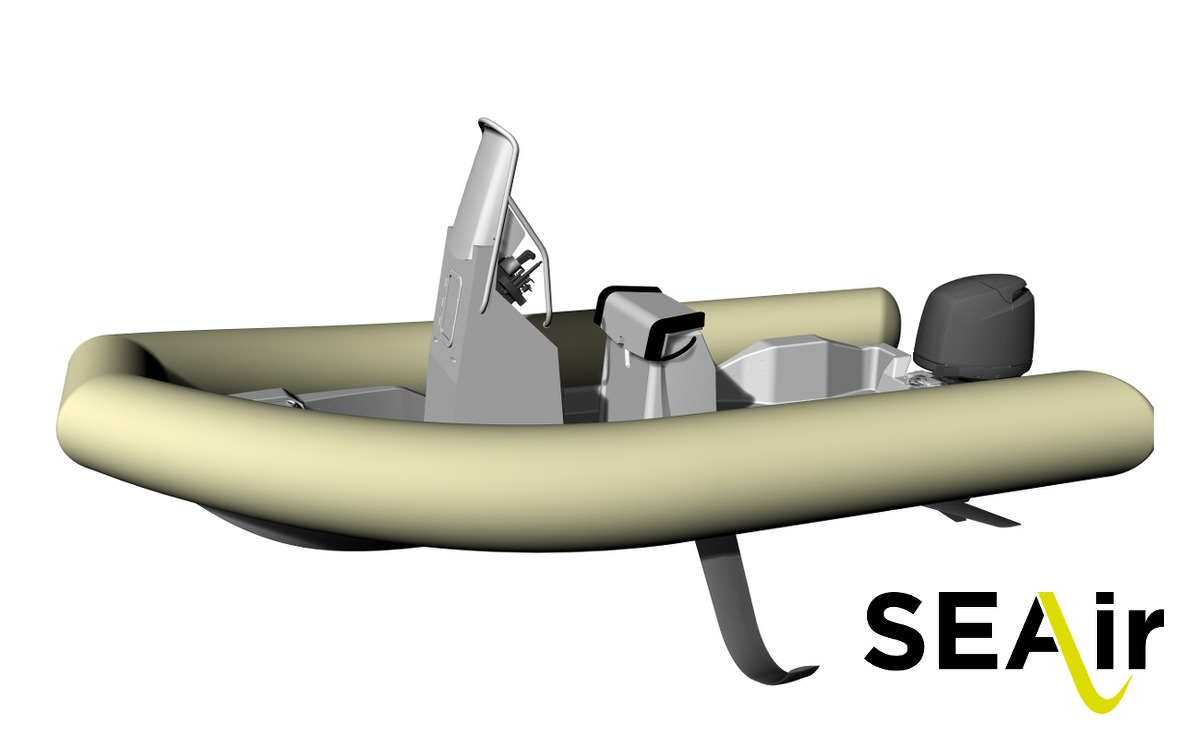 The summer is now all mapped out for SEAir. The Flying RIB will continue a variety of tests with successive trips out to sea to fine-tune the settings and confirm the data collected by the measurement systems installed on board. While current results show that the Flying RIB is hands down the most stable craft, we will shortly be launching a series of tests to prove this, with an identical boat equipped with the same measurement systems, but without the SEAir foil kit.

SEAir’s Flying RIB project has been certified by the Green Tech programme run by the French Ministry for Environment, and has received an award from The French industrial cluster for advanced manufacturing technologies EMC2. SEAir uses standard methods to produce foils on site in its workshops, while developing new robotic production processes with which it will be able to mass produce them. A foil produced by a fully automated system should be in the water by next autumn.