Home > News and Events > The rise of foiling monohulls in competitions! Flying sailboats about to enter the race

The rise of foiling monohulls in competitions! Flying sailboats about to enter the race 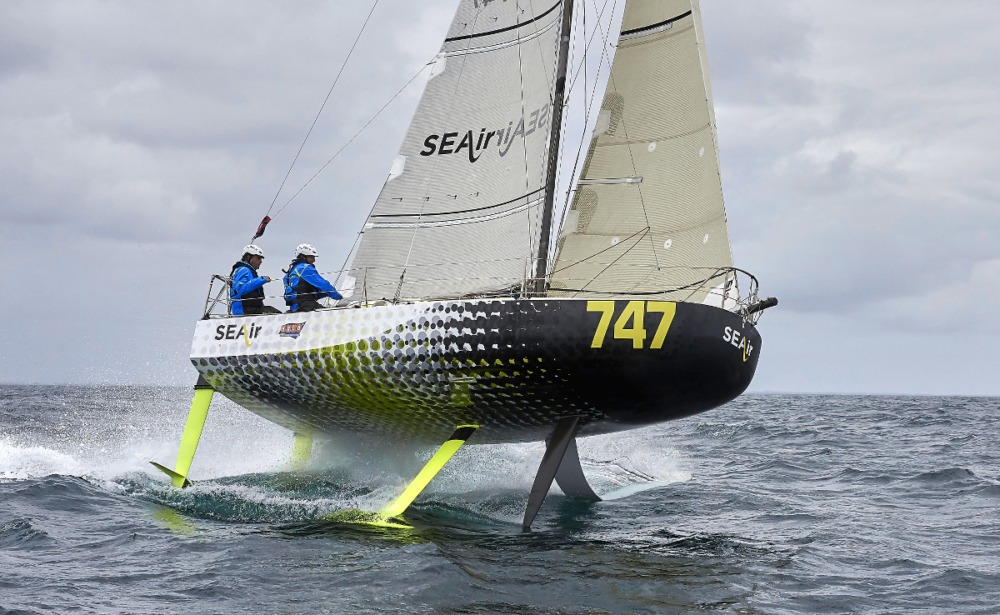 It has been two years since we started work on our SEAir 747 foiling monohull. It has taken a considerable time to develop this boat and solve some key issues.

Through the studies we carried out beforehand, our work in the workshop, sea trials, and studying appendage distortion measurements in real time, as well as mechanical adjustment issues we have perfected foiling principles for different sea conditions.

The time has now come to join the racing circuit with the new improved “Full Flying” SEAir 747. Based on this work, we foresee a line-up of its elder sisters in offshore and bay races. And we believe that no matter how big or small the boat built on these principles is, it will be faster than any others of the same size in most weather conditions.  So SEAir decided to look for a sponsor who would become an exclusive pioneer internationally!

The public debate on offshore foiling is so conflicting that it is high time to continue crossing the oceans to see where it will lead us. Naturally, the human endeavour involved in sailing these foiling boats is huge and the races can turn out to be a great strain and sometimes even inhuman. Whether we should question whether foiling is a rational choice for performance all depends on the skipper’s approach, his foiling or high-speed offshore sailing experience, and the equipment.

Such a renewal is primarily a technical subject with the competitive aspect being of less priority. To maintain handling conditions over a long period, the boat cannot be run constantly at its full potential. It requires some restraint so that it can deliver the right results at the right time, following three principles : Archimedean, suspension and flight. Against all expectations, it is more prudent to envisage racing on the last two principles and, in most instances, the boat is still faster than others without foils.

To take the SEAir 747 a step further, it is now our strategy to open prospective orders for the « first 40 ft Full Flying monohull by SEAir », with delivery in early 2019. With many important new contacts worldwide SEAir has no intention of stopping there. Although we have already simulated foiling with this 40-foot boat, we are currently finalizing the first computer-generated images which will soon be unveiled. It is intended for single-handed offshore racing programmes such as the Route du Rhum, but can also be used with a crew.

As for bay racing, the future “Full flying” AC 75 monohulls announced for the America’s Cup backup SEAir’s research, and particularly the importance of the canting foil. Although this side canting movement serves no purpose for retractability, it does provide stability at sea, by managing the height of its tip. This lengthy work capitalizing on experience with kinematics on a multidirectional foil control unit, whose patent has just been registered, has confirmed the need to launch a 39 ft development platform with no keel !

This promising news is also a good technical challenge. On seeing the highly complex and stressed parts of the AC 75 foils, one might wonder whether we are capable of manufacturing them without a bother. This shows the huge importance of SEAir’s work in the robotic manufacture of full carbon or mixed material foils. These many fields of investigation have now led us into discussions with several of the teams preparing for the America’s Cup.

So the line-up of the 747 prototype’s sisters will also be a line-up of cousins for single-handed or crewed offshore or coastal racing. The industrial difficulties have been examined by SEAir for over two years and it is now time to prepare for a large family of foiling monohulls to enter the race!